This article will introduce you to context-free grammar, how it expresses a programming language specification in human readable form, and how GoLang presents complex language features with simple grammar constructs relative to the ECMA-262. This article will not teach you entire metasyntax but merely exposes you the idea of production rules.

If you have ever visited the ECMAScript language specification (aka. the JavaScript specification, or ECMA-262). You probably wondered what the heck is going on if you’re an average javascript developer like me 😄. It is an excellent resource for learning the intricacies of how javascript works, but it’s notoriously confusing for many javascript developers. Google and the ever so helpful stack overflow fail when you need them the most. Reading the language specification lends itself well in such situations. In this article, we will talk broadly about context-free grammar and using EBNF to express it.

Having looked at goLang recently, I found myself in the language specification docs. I was ready to close the tab if met with a humongous blob of technical grammars written by seriously smart folks 💁🏾‍♂️. Well, no one wants to read about Declarations and scope, Operands and other language specs at midnight, right ? Guess what; I read about those and more with ease, gathering a fair idea in a short time contrary to the ECMAScript specs. Go’s simplicity is even evident in its specification documents. How ? EBNF.

EBNF stands for Extended Backus-Naur form, a metasyntax notation for encoding grammars intended for human consumption. It is a non-strict superset of BNF. For the pharmacist out there, no it is not the British National Formulary. I digress. EBNF expresses grammar as a series of terminal and non-terminal symbols that are linked either by sequencing or choice. Think of terminal symbols as alphabets, and punctuation marks, whereas a phrase constitutes a non-terminal symbol which can be further broken down into terminal symbols. Want to explore the world of production rules and context-free grammar ? start here. 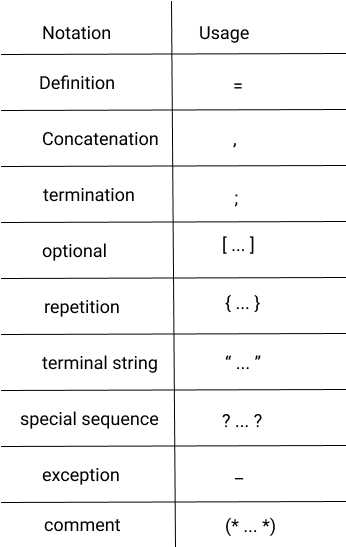 Before explaining the seemingly gibberish up there, take a look at the table above I will wait.

Done ? The example is groot’s entire vocabulary 😅 expressed as productions. And no, it’s not a joke. From the table above, we know = is a definition. The token to the left side of the definition must always be a non-terminal symbol. The right side a terminal, and or a sequence of non-terminal symbols.

For Statement in EBNF

A for statement executes a block of code until a condition is met. It takes three forms in goLang. For brevity sake I will not write out the production rules for the non-terminal Condition, ForClause and RangeClause at the right side of the definition. The terminal symbols are representative of what you write in goLang code. Thus, “for” as a grammar in goLang is terminal.

For comparison, here is a for statement in the ECMAScript specification.

The context-free grammar ECMA uses, arguably makes the language specification very difficult to read and unwelcoming to first-timers. But a short study of the notation will improve your edge on on grasping the document. If you’re interested in learning about the notational convention for the ECMAScript specification document click here.

Well, there we go folks, learning about the context-free grammars prior to reading a language specification can better equip you to understand with relative ease. You should try it ! I hope you learnt a thing or two.